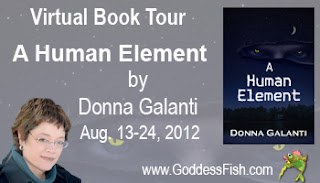 Book 'Em North Carolina is pleased to bring you a variety of information about authors of various genres and backgrounds. Today's guest is Donna Galanti, author of The Human Element. She comes to us through Book Tour Partner Goddess Fish.

Donna will be giving away a $50 Amazon Gift Certificate to a randomly drawn commenter during the tour. So please leave a comment. The more comments you leave, the greater your chances are of winning. You can follow her complete tour here. 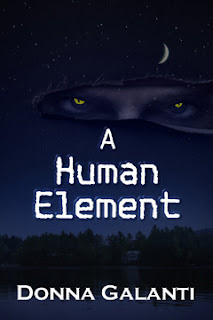 In A Human Element, one by one, Laura Armstrong’s friends and adoptive family members are being murdered, and despite her unique healing powers, she can do nothing to stop it. The savage killer haunts her dreams, tormenting her with the promise that she is next. Determined to find the killer, she follows her visions to the site of a crashed meteorite–her hometown. There, she meets Ben Fieldstone, who seeks answers about his parents’ death the night the meteorite struck. In a race to stop a mad man, they unravel a frightening secret that binds them together. But the killer’s desire to destroy Laura face-to-face leads to a showdown that puts Laura and Ben’s emotional relationship and Laura’s pure spirit to the test. With the killer closing in, Laura discovers her destiny is linked to his and she has two choices–redeem him or kill him.

An Excerpt from A Human Element


He was seven when he discovered he would never be set free. His doctors and teachers gathered together one day in his room to tell him he would never be allowed to go anywhere at all. It was too risky. They said he wasn't human and could not live among humans. When he asked if he could meet the girl, they shook their heads, not understanding him. What girl? He couldn't explain. He just knew she was part of him and she was out there growing up with a family. He hated her for that. He wanted a family.

But X-10's life would instead remain one of exhibition in a cell. And so X-10 was left with the doctor, forgotten in a world that existed on the outside. A world X-10 planned to make his escape into. A world where he could have a name, not just a number. He could escape to mountains somewhere and live in remote woods. Unfound. Free

"Charlie," he grunted. "My name will be Charlie. A hero who escapes his prison and kills all these pigs."

But first he would kill the doctor in a long and suffering way. Then he would find the girl and kill her too. X-10 hated the girl with intensity. Thinking of her threw him into violent rages when he tormented himself thinking of her life out there in the world.

“Laura,” he seethed through his steam-shovel mouth.

She got to live a life he never had. A life with a name.

What Reviewers are Saying

“A thrilling ride full of believable characters, a terrifying villain, an epic battle for survival, and a love worth killing for. A page-turner filled with fascinating twists and turns!” – Marie Lamba, author of WHAT I MEANT 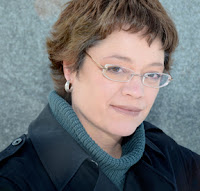 Donna Galanti is the author of the paranormal suspense novel A HUMAN ELEMENT (Echelon Press). Donna has a B.A. in English and a background in marketing. She is a member of

International Thriller Writers, Horror Writers Association, The Greater Lehigh Valley Writers Group, and Pennwriters. She lives with her family in an old farmhouse in PA with lots of nooks, fireplaces, and stinkbugs but sadly, no ghosts. Visit her at: http://blog.donnagalanti.com/wp/